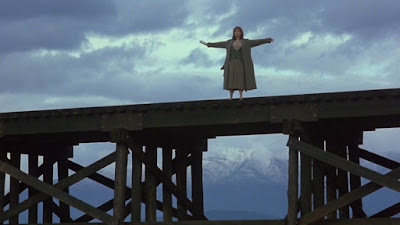 One of the best writers hailing from the American midwest is Marilynne Robinson, an Idaho native whose books frequently examine the roots and branches of the Christian faith among the residents of rural communities. Hers is a chilly, foggy-breathed prose redolent of evergreens and frozen lakes, and her characters’ quiet struggles against society and inner doubt ring as powerfully as thunderclaps. Her 1980 debut novel Housekeeping is a classic of American letters, examining the lives of two sisters as they’re shuttled around from home to home after their mother commits suicide. They’re finally left in the care of their aunt Sylvie, a kind of modern day holy fool who chaffs against the strictures of civilized society. Before long, one of the sisters abandons the other and emancipates herself from Sylvie’s care, incapable of standing the shame her antisocial behavior brings on them. Having fallen under Sylvie’s spell, the second sister sets out on the road with her to live as itinerant vagabonds.

The novel is more than just a story of two sisters and their odd aunt, it’s also about familial legacy and the gravitic pull of history, best encapsulated in a train crash into a lake that’s hovered in the minds of the sisters’ adopted town for decades. There’s a certain fear that any attempt to film the novel would lose sight of these thematic underpinnings, but Bill Forsyth approached them as essential parts of the whole for his 1987 adaptation. Known as a director of British dramedies famous for their attention to local color, Housekeeping sees Forsyth settle into the rhythms of the midwest with the same ease Werner Herzog did when he shot Stroszek (1977) in Wisconsin (though that’s where the similarities between the two films end). Everything from the casual mutterings of hobos to the cluck-cluck-clucking of gossiping old biddies is perfectly just so, and Michael Coulter’s cinematography captures its Idaho setting’s frosted majesty without mistranslating it as barrenness. Christine Lahti’s performance as Sylvia is pitch-perfect, expressing the character’s inner oddness and restlessness without transforming them into dull neuroticism.

Does the film match the novel? No—there’s a certain je ne sais quoi to Robinson’s prose that doesn’t translate to images. But Forsyth didn’t seem troubled by it, later explaining than he viewed the film as “a commercial to get people to read the novel.” And to that extent he succeeded marvelously.
Posted by Steve Kopian at May 11, 2020