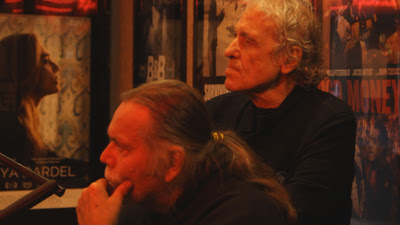 Abel Ferrara's portrait of cinema owner Nick Nicolaou, who started in the movie theater business in the 1970's and continues to operate theaters in and around New York City successful and wholly independently.

Small niche film is a joyous history of the movies in New York City over the last half century. It is a portrait of a man who has struggled to keep the movies cheap and affordable while still making a buck.

The trouble is there are going to be two camps concerning the film, those who love the history and nostalgia like myself, and the rest who really don't care. I suspect that most people are not going to care. A high percentage of people at my screening hated the film because they didn't see the point. On the other hand those that love the movies, and love movie going and loved to wander around New York finding new places to go or being saddened when an old classic place closed are going to love it.

I mention this split because talking to people in the days following the screenings I ran into many people who dismissed it and some who absolutely loved it, entirely for the nostalgia. It is the nostalgia that makes me a firm fan of the film (despite it being rough around the edges.)

Highly recommended for those who loved the heyday of NYC film going and miss the old  theaters. For everyone else, you're on your own.
Posted by Steve Kopian at May 11, 2020