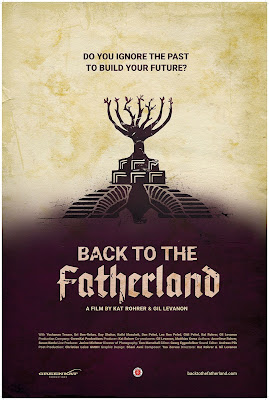 Filmmakers Kat Rohrer and Gil Levanon became friends during their time at college in New York City. Gil comes from Israel, Kat from Austria. Their families' history is strikingly different. Gil is the granddaughter of a Holocaust survivor, Kat is one of a Nazi officer. In the wake of Gil deciding that in order to better herself financially she has to move to Germany, the pair decide to examine how personal memory and the memory of their countries and cultures deal with tragic events in the past and shape the future.

In a time where some deranged people are looking to the past to find a beacon of hope and way to the future and deciding that that Nazi's might have been right, BACK TO THE FATHERLAND offers us a heady discussion about how we should look at the past. Have we moved far enough forward that we can return to a place that caused do much pain? Additionally how are we deal the fact that antisemitism and xenophobia are on the rise and that moving back may very well be putting some people in danger.

It's a great deal to process and the film deftly handles the conundrum thanks to both Kat and Gil being excellent tour guides as well as their keeping the discussions centered on people who can put the problems and possible solutions into  compelling words.

BACK TO THE FATHERLAND opens in theaters in NYC Friday.
Posted by Steve Kopian at June 11, 2019