The original plan for this piece was that it was going to be two separate reviews of two unrelated films, the Opening Night Film REDEMPTION and the Main Slate film RED COW. The trouble was after I saw and love with RED COW I watched REDEMPTION and I realize that Avigal Kovari who blew me away in the first film had small role in the second. Sure it wasn’t as meaty a role as RED COW but it still shows just how good she is.

Not to put too fine a point on it Avigal Kovari is one to watch. A young woman of stunning talent she has the ability to do what Michael Caine said was the key to great film acting, which is put it all in the eyes. If you look like the character is behind your eyes then you’ve sold the character. Kovari does that and more. She is a stunner. Oscars and super-stardom are coming

If you want to know what one of the perks of covering a film festival is it is making discoveries like this. Getting to  see a new amazing performer is always great. But being lucky enough to see them in multiple roles in a short period of time is either a miracle or a film festival, and The Israel Film Center Film Festival is a miracle. You get to make a discovery in one film and then have it confirmed in another.

If you want to see the work of a young lady who is going to explode on the international film scene very shortly get to the Israel Film Center Festival in New York and  see Avigal Kovari in REDEMPTION and (especially) RED COW.

What follows are the two reviews I wrote for the two films. I should warn you that the REDEMPTION piece is a shorter because I didn’t have a great deal to say about it (its still a great film, just go see it) and because Kovari isn’t in the film that much. It’s a good movie but when I discovered Kovari was in it I became distracted, I wanted to talk about her, which isn't what the film is about. Worse I saw it after RED COW and I wanted her to rock the pillars of heaven once more, but REDEMPTION is not her film to do that in. It’s a solid film, and worth your time, but it didn’t focus on my new cinematic obsession. 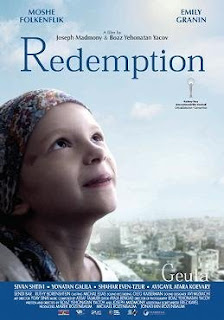 REDEMPTION  is sweet film. The story of a religious man who has to return his life as a secular singer to pay for his daughter’s cancer treatments, it moves you at your core.

The film beautifully explores the notion that no matter how hard we try to forget it we are tied to our past, as well as the things we will do for the people we love most in the world. Filled with wonderful characters and some really good music the film sucks us in and pulls us along. 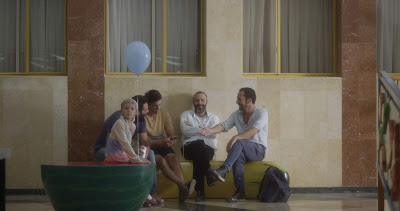 While the film was not on my list of films to see at the Israeli Film Center Film Festival it was recommended to me by a friend who thought it was gangbusters, and it' turned into a favorite, despite my not saying a great deal about it.

I highly recommend it when it opens the festival on Monday night. 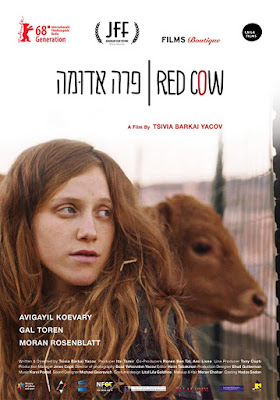 Avigal Kovari stars as the daughter of an extremely religious father. He believes that the red cow that they are raising will be used to consecrate the temple according to scripture. He is so focused on his belief and the political atmosphere (it is shortly before the assassination of Rabin) that he doesn’t see that his daughter is growing up and beginning to head in her own direction. Not that he would really like where she is going since women are only supposed to be wives and mothers.

This is a lovely coming of age film focused on and anchored by Kovari. Her star making performance keeps us watching as she begins to realize that she has her own thoughts about the state of the world and that she likes girls. It is a path that sets her into conflict wither dad who doesn’t expect her to have her own thoughts and feelings. Kovari sells it and we fall in love with her both as a character and as an actress.

RED COW is a gem of a film and is highly recommended when it plays at the Israeli Film Center Film Festival on Tuesday the 4th of June. 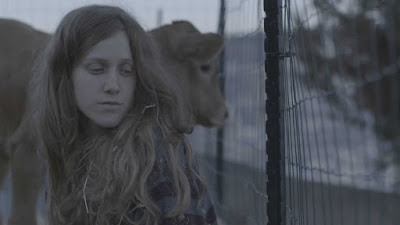 For tickets to both or either of these film go here
Posted by Steve Kopian at June 01, 2019