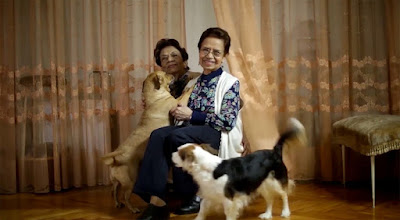 I don't have a great deal to say about LUISTA PHOTO STUDIO beyond just see it. I could add that it is one of my favorite films at the Brooklyn Film Festival

A portrait of the Escarria sisters, who for decades took pictures of all of Argentinian Show Business, the film is beautiful history of the  culture of a country, a stunning record of a body or artistic work and a loving and wonderful portrait at sisters who did it their own way.

For give me, I was pretty much charmed from the first frame to the last. To be certain I had no idea who all the celebrities were but I didn't need to since the real focus are on Luista and her sisters who are exactly the sort of people you'd want to hang out with. Nicely unassuming they grab your heart because they remind you of one of your favorite aunts, you know the really cool one.

This film is a charmer and a keeper. Why this film isn't on more people's radar vexes me because it is a lovely little film that deserves a wide audience.

Go see it. And don't worry about not having any idea who the celebrities are- its not about them- rather it is about the ladies who ran the studio.

For tickets and more information go here.
Posted by Steve Kopian at June 06, 2019