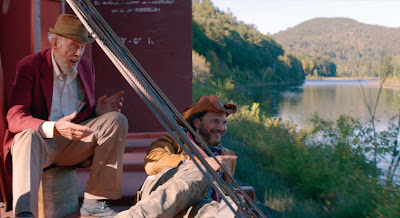 Perhaps the most underrated film by noted cinematic surrealist David Lynch is The Straight Story (1999), a poignant road movie starring elderly character actor Richard Farnsworth in his last role before killing himself after a long and painful battle with prostate cancer. As he traverses the midwest on a tractor to visit his ailing brother, he meets and enlightens various strangers and misfit runaways, leaving a trail of compassion and wisdom along the interstate highways. Not only is that film an overlooked masterpiece, it’s also everything Michael Worth’s Apple Seed isn’t. The opening night film for this year’s Dance with Films festival, it’s a meandering, malformed monstrosity of sentimentality and road movie cliches with nothing but a semi-recognizable cast to recommend it.

Advertised as the last film made by beloved Western performer Rance Howard—although according to IMDb he has two other credits currently in post-production—it’s a sickeningly sweet story about Prince McMcCoy (Worth), a disaffected, depressed criminal traveling from his home in Arizona to his hometown of Apple Seed, Vermont to rob a bank in a final blaze of glory. But before he makes it a few miles he runs into Carl Robbins (Howard), a winsome, doddering 88-year-old hitchhiker with a perpetual grin and a bottomless supply of old-timey wisdom. Along the way, they have many wacky misadventures: skinny-dipping in a motel pool; preaching on the porch of a small-town pharmacy for gas money; getting into bar-fights with drunk, Karate Kid-quote spewing jackasses. The film’s so enamored with Howard as a personality that it lets him take over scenes and prolong them long after they should’ve ended, such as an interminable early sequence in a diner where he makes a lengthy speech to a charmed waitress about how good her homemade chocolate cake is, eventually standing up at his seat to loudly urge the other customers to try it. By the halfway point, we wonder whose story this is, Prince or Howard’s.

The answer is neither and both, resulting in a narrative that somehow ends with thirty minutes of runtime left where Carl’s reconciled with his past life as a bank robber and Prince with his destructive personal relationships. Apple Seed is alternatively boring and hilariously inept; any enjoyment viewers get out of it will come from their willingness to endure saccharine blandness for two hours with Rance Howard.