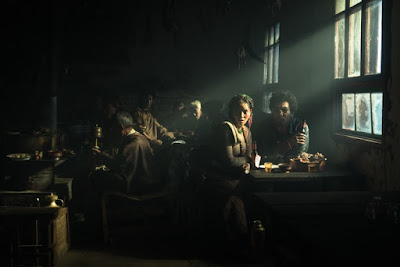 Long distance trucker has a lot to ponder as he runs over a sheep on the road and picks up a man on his way to kill someone.

Wong Kar Wai produced film is going to thrill the art house crowd and potentially drive away anyone looking for anything more than a meditative look at life and karma. I say this not because there is anything wrong, but rather most of the first quarter of the film simply involves the truck driver Jinpa (as opposed to the man he picks up who is also named Jinpa) driving through the wilderness. Yes, he hits a sheep, but that is kind of a non event  at the moment, even though it echoes through the rest of the film.

As meditative looks at existence goes this is really good. While I will say that I'm not certain the pay off was worth the long ride there, I still completely enjoyed the trip.

Recommended for those who like thoughtful reflection over endless action.