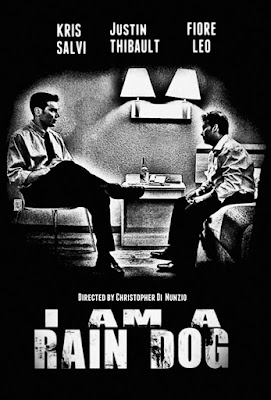 Christopher Di Nunzio is one of the best directors out there even if you’ve never heard of him. If you want to know why I delight spending so much time in the inde film trenches it’s simply because I get to run into filmmakers like Mr Di Nunzio who is turning out small gem after small gem over and over again and reminding me that the hope of cinema lies not with Hollywood but with the small inde filmmakers, like him, who are doing what they love so that those of us lucky to stumble upon their work can have our lives brightened.

I bring this up because I was gifted with a chance to see his newest short film I AM A RAIN DOG whichhe recently completed. The film has a man in a motel room calling a specialist for help when he finds himself lost. While he is physically lost, he is also existentially lost and looking for guidance. As the film opens help has arrived and over the course of a film a way is found.

A beautifully crafted film this is another stunner from a man who has become one of my favorite directors ( go see his DELUSION or A LIFE NOT TO FOLLOW to see why). I AM A RAIN DOG is a film that is as near to perfect as you can get so we hang on every word. It is perfectly written and edited so nothing is wasted. Every image, word and gesture counts. Running a brief 12 minutes it feels like a full meal. It is a film that leaves you feeling as though you’ve actually seen something substantial and something you are going to carry with you.

I AM A RAIN DOG haunts me. It is a film that I want to revisit I want to try and unlock more of its secrets. Part of me wants to see a feature version of this tale- but this film is so perfect that going to a feature might wreck it.