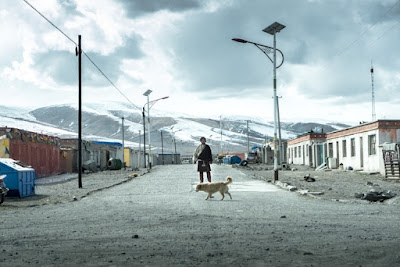 Pema Tseden’s Jinpa is less movie than mood made manifest. There’s a story and there are characters, but these are mere set dressing for a hypnotic meditation on death and destiny that reads like a Zen riddle designed not to be solved but to shock the reader into spiritual awareness through the contemplation of a paradox. To even consider it as a single coherent piece would probably miss the point entirely, as Tseden smashed together two different literary sources—Tsering Norbu’s The Slayer and his own short story I Ran Over a Sheep—with little regard for how they might actually complement each other. Instead Tseden allows us to make sense of the film’s internal logic ourselves, much as we might parse over a dream upon waking.

The film centers on a Tibetan trucker named Jinpa who—in a meta-textual flourish—is played by an actor also named Jinpa in real-life. While driving on an isolated road on the barren, windswept Kekexili Plateau, the stoic Jinpa accidentally runs over and kills a sheep. A pious Buddhist, Jinpa collects the body to take it to a monastery for a priest to help guide its soul to the afterlife. But on the way, he picks up a bedraggled hitchhiker (Genden Phuntsok) carrying a silver dagger who tells him that he’s heading for a nearby town to kill the man who murdered his father years ago. The hitchhiker’s name? Jinpa.

There’s a surrealist logic permeating the film extending beyond the coincidence of them having the same name; there’s a sense that they’re stuck in an endless world perpetually repeating itself. Take one scene where the trucker travels to a bar to collect information on the hitchhiker after dropping him off and deciding he needs to stop him from killing his father’s murderer. While talking with the barmaid, a group of locals tell stories in the background. Later, during a flashback of the hitchhiker entering the same bar, the same locals are telling the same stories word-for-word. Is this even a flashback, or is hitchhiker Jinpa another aspect of trucker Jinpa and the two are really the same? Probably not, as trucker Jinpa finds people who’ve met hitchhiker Jinpa. At least, we think we do. Who or what can be real in a landscape outside time and reason itself? Certainly not concrete answers to questions no unenlightened mind can ask. 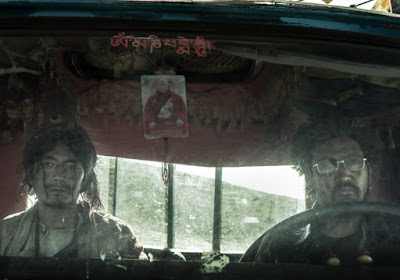