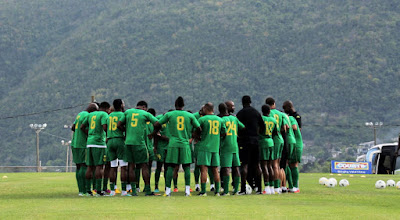 Reggae Boyz is the story of Jamaican soccer team as they attempt to put a team together which will get them back to the World Cup – a place they haven’t been in over 20 years.

This is a solid sports documentary that finds its place in the pantheon of sports docs by not just being about the team and the coaches but about the society that cheers it on. If you truly want to understand the power of sport to bring a country together and to do good things then see this film. There is a comment in the opening minutes about how when the team was in the hunt for the World Cup crime essentially disappeared as the whole country came together to watch the games. Over the rest of the film we come to realize how true that was as we see how the fans carry the team on their backs and how they live and die with them. It’s a wonderful dimension that is missing from almost every other sports film which always focuses on the players.

This is a solid film and definitely worth your time.
Posted by Steve Kopian at June 02, 2019