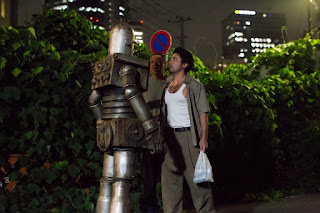 One of the first scenes in Nobuhiro Yamashita’s “dark comedy” Hard-Core sees its main character, a shiftless loser named Ukon (Takayuki Yamada), go to a bar and unsuccessfully flirt with a pretty woman. When she rebuffs his advances, he respectfully backs away. Soon afterwards, a group of drunken frat-boys comes barreling in, harass the same woman, and eventually get her to sing karaoke with them. As she warms up to their inebriated nonsense, she plants a chaste kiss on one of their cheeks. Incensed, Ukon attacks the frat-boy, screaming that they should leave her alone. The subtext being, of course, that if he couldn’t get lucky, it was unfair that they—men so obviously beneath him—should. And yes, he’s supposed to be a sad-sack early on the film, but the stink of Incel entitlement never quite leave Ukon or the film itself. 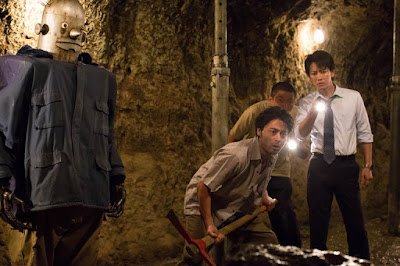 Stumbling from confused set piece to ill-advised character twists, Hard-Core is an ideologically heinous film that can’t even manage to be funny or biting. It revolves around Ukon and his struggles to make it in life in the shadow of his successful stock broker younger brother Sakon (Takeru Satoh). To wit, he makes a paltry living working for an ultanationalist political group digging in a cave for a legendary caché of gold from the nineteenth century. His only friend is a mentally handicapped loser named Ushiyama (Yoshiyoshi Arakawa) who is so awkward not even prostitutes will sleep with him. (This subplot of Ushiyama’s pathetic attempts to lose his virginity tip the film’s malevolent misogyny off to those who don’t pick up on the narrative’s incel leanings.) After a time, they discover an abandoned robot straight from a 50s Republic serial they name Roboo and adopt him as one of their own. Not that a talking, feeling, hyper-intelligent robot matters that much in the grand scheme of the film; he’s an incidental side character for most of the run-time, leading us to wonder why in the hell they would introduce such a fantastical element to the story if they rarely use him. Instead, this is the story of Ukon’s personal growth, something which not-so-coincidentally happens as soon as he finds a conventionally attractive woman to sleep with.

Hard-Core is an unfunny, overlong, unfocused film that can’t even keep up a cohesive narrative.

Avoid it at all costs. 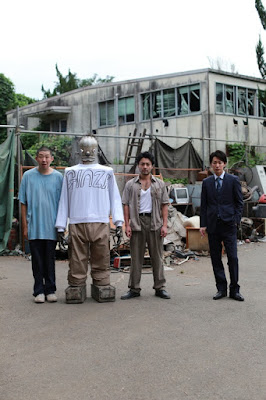 HARD-CORE plays later in July at Fantasia Fest in Montreal
Posted by Steve Kopian at June 30, 2019

Email ThisBlogThis!Share to TwitterShare to FacebookShare to Pinterest
Labels: Fantasia 2019, japan, manga, Nathanael Hood, not worth the effort, nyaff 2019