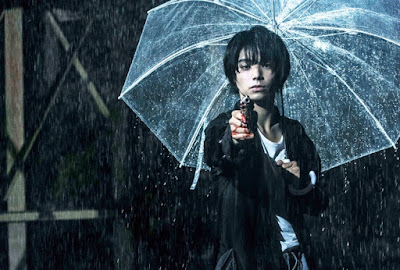 Mannered and deliberate tale of a college student who picks up a gun from a murder scene and suddenly feels empowered- until the constant thinking about the gun begins to warp him.

Moody black and white film is a very much a film with a great deal on it's mind. Made to look and feel like a film noir it is a kind of throw back to the 40's with a voice over and our hero being followed by the police who suspect he may know more about the murder than he is saying.  At the same time the film wants to say something about how weapons or perceived power warps our minds.

For me the film was an okay time killer and little more. While looking good and being well told, the film unfortunately doesn't do anything unexpected. Once the film sets everything up you can pretty much guess where this is going to go, even to the ending which goes from black and white to color in  a slow bleed like blood running from a body.

While not a bad film it isn't anything special. I suspect part of the problem is that the filmmakers think that the notion of a gun warping someone in and of itself is something special when in fact it is no different than any other similar tale where money or an object changes someone.
Posted by Steve Kopian at June 30, 2019