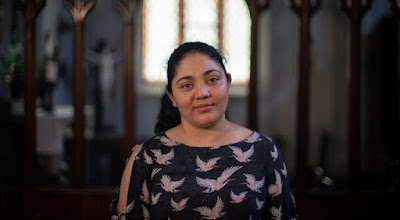 After President Trump was sworn in Amanda Morales, a mother of three, who was in the US illegally found she had a choice to make. Despite having been in the country for years the Trump administration's fear of people who weren't white and rich  had them moving to remove anyone "not from here". Morales sensing that ICE was going to deport her at any moment left her home on Long Island and took refuge in a church in Manhattan and ask for sanctuary.

Vital, important and most of all moving portrait of one woman caught in between a rock and hard place. A "you are there" look at a one woman's fight to stay in the country she now calls home will give you a real look at what it is like for the thousands fighting not to be sent back to a place they no longer call home. This is not a five minute piece of highlights that you see on CNN. Instead this is what it's like for the long haul. We don't just see the bright shiny faces for the camera, but the moods at other times and we see the toll.

Director Andrea Cordoba has made a film you must see. Wonderfully not sensationalist or pushy she allows events to simply transpire before us allowing us to be sucked in at our own rate and slowly warm to everyone involved. We move through events at a natural pace and it gives us time to consider what we are seeing and reflect on events. The result is a film that gives us a great understanding of the larger picture, and in thoughts and emotions that linger long after the film is done.

A must see when the film plays this weekend at the Brooklyn Film Festival (Tickets here)
Posted by Steve Kopian at June 07, 2019