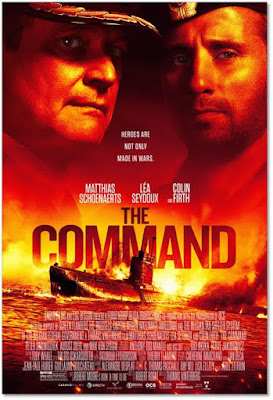 THE COMMAND is the story of the Kursk submarine disaster that occurred on August 12th 2000. A submarine on a training exercise had a practice torpedo explode sending the ship to the bottom of the sea. As the men struggled to survive the first explosion,  a second, registering 4.2 on the Richter Scale, caused even more damage. The few that survived to that point huddled in the rear of the ship to await rescue that was to come much too late.

Covering the events on the ship, the struggles of the families to not only get information but help for their loved ones, and the rescue efforts by the Russian and British navies, the film covers a great deal of territory. For reasons of cinematic suspense the time frame of events is tweaked, much in the way the events in Christopher Nolan's DUNKIRK are altered to get to one point in time at the end of the film. If you are aware of what happened you'll notice the alteration of time otherwise this is just a tense drama.

A well made and well acted film, THE COMMAND will move many people with its recounting of the tragedy and it's revelation of gross incompetence on the part of the Russian Navy.  The Russians were clearly not prepared for anything like this to happen, having only rescue vehicle available that was described as'a bucket of bolts". Worse their efforts to contain the news of their troubles lost them valuable time.

My reaction to the film is kind of mixed. While it is, as I said above, well made, knowing what happened lessened the suspense. I knew how this was going to go and on some level I was simply waiting for the end I knew was coming, so the suspense kind of drained out of it. While I hung to the end, it was a maudlin affair waiting for the big reveal the scale of the tragedy.

Currently available on Direct TV THE COMMAND will hit theaters Friday, and reservation aside, if you can see it on a big screen do so because the cinematography, especially the use of the frame, is stunning.
Posted by Steve Kopian at June 19, 2019