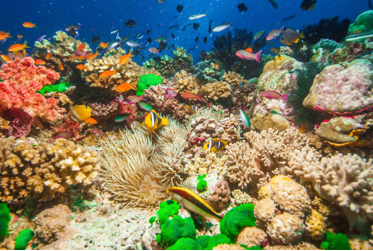 WONDERS OF THE SEA is a film that vexes me. A must see from the instant that I saw the trailer, I fell long and hard for the underwater photography, I couldn’t wait to see it. I was also curious why something that looked this spectacular wasn’t getting a big theatrical release. Now having seen the film I am left pondering how to remove anything that isn’t related to undersea life.

Let me say right at the start you want/need to see this film. All of the underwater material is some of the greatest I’ve ever seen. It is stunning and often beyond words. I saw things in this film that I’ve never seen before. More times than not the images, say the “breathing” giant clams, had me talking out loud to no one. I cannot do the film justice other than to say WOW and that this should get every cinematography award in the world.

The problem is that everything else no related to the marine life is gawd awful. The wrap around footage of the crew is awkwardly staged. The narration is condescending and just plain bad. For a film aimed at making people love the ocean in order to save it, the narration is so bad it very well may turn people off and have the reverse effect. Watching the film at home on a screener I ended up scanning through anything that wasn’t related to the animals. It really bothers me that the wrap around stuff is this bad because it really hurts the film.

On the other hand, I don’t think anyone is going into the for anything other than the cool images so they will be forgiving enough to watch the whole film…which is the way it should be.

Highly recommended for the underwater images to anyone who can forgive the rest of the mess.

To purchase the film on iTunes go here