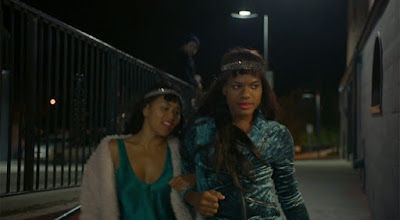 Yet it’s in this very undeveloped country that Shaz Bennet sets her film Alaska is a Drag. The film follows a young black drag queen named Leo (Martin L. Washington Jr.) living in the aggressively white and aggressively heterosexual land of rural Alaska, gutting fish in a cannery at day and voguing at night in the small house he shares with his best friend and sister Tristen (Maya Washington) and their emotionally disturbed gambling addict father who preaches the Gospel on roadsides. He dreams of one day making it big on a drag reality TV show, striking it rich so he and Tristen can escape to sunny LA. We watch as he prepares for his first drag show at the “only gay bar in 100 miles,” a dive owned by a reticent grouch named Jan (Margaret Cho) who probably cares more for her clientele than she lets on. At the same time, Bennet matches this rising action with a budding romance between Leo and Declan (Matt Dallas), the former’s new sparring partner at the boxing ring he works out at. Oh, and another rising action where Leo trains for his first boxing match, a fight both scheduled on the same day as his drag performance and against his former best friend/lover Kyle (Christopher O’Shea), now a violent homophobe.

There’s a surprising amount of narrative to handle for only 83 minutes, but Bennet keeps it all flowing briskly and competently until after the day of the boxing match and drag show, devolving into soap opera hysterics. This character’s cancer has returned! A gang of bigots force Leo and Declan to fight each other! Wait, what?

It’s a shame, because Alaska is a Drag features some brilliant performances and some beautiful fantasy imagery, such as omnipresent Northern Lights shining even during daytime and trails of flower petals blossoming behind characters as they walk. But the implosion of the story incinerates too much goodwill for it to work.