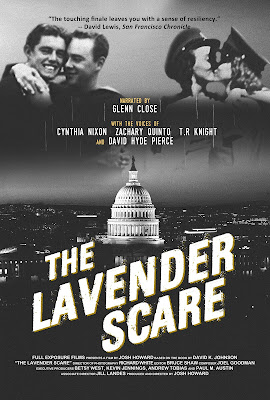 As America went from the Second World War and into the Cold War the powers that be suddenly realized that gay men and lesbians could be blackmailed into turning over secrets so President Eisenhower ordered that anyone who was gay was a potential threat to national security and had them removed. Of course there was no evidence of this ever happening but it was done anyway, ruining the lives of thousands of people.

THE LAVENDER SARE is the story of the Federal governments decades long hunt for gay and lesbians in their midst. Revealing yet another shameful chapter in American history the film charts the course of the purge via interviews, animated reenactments and audio recordings. It reveals the strange zeal that some people had for hunting gays and more chillingly the willingness of many people to turn in their friends in an effort to help keep America strong.

A good but mostly run of the mill documentary on the scare is a solid primer on the subject. It has enough information to reveal not only how stupid the purge was but also how tragic. I liked the film a great deal but as someone who was aware of the madness that had infected the country I wish it was a bit deeper. I wish there was more stories about what happened. I wanted to be drawn deeper in to the quiet tragedy and not just have a cursory overview.

My quibbles aside this is an important film. If you can’t catch it in it’s theatrical run (beginning Friday), it will definitely be worth your time when it hits PBS on June 18th.
Posted by Steve Kopian at June 03, 2019