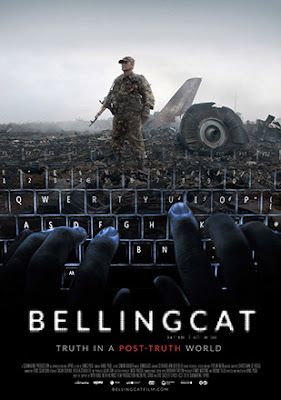 BELLING CAT TRUTH IN A POST TRUTH WORLD is one of the best I’ve seen in 2019. Not only is it vitally important but it is also a damn good film it is the story of the citizen reporters who run the Bellingcat website. The group of people comb through modern technology to get to the heart of the important news stories such as revealing who the Nazi like marchers in Charlotte were or working out that the Russians were the ones who downed a civilian plane in Ukraine. We see their methods and come to understand why what they do is so important.

If you have any interest in what is going on or how it is portrayed in the media you must see this film. In a world where every detail of anyone’s life is spun to the point of death this film makes it clear that you cannot trust anything that isn’t verified. And in an age where everything can be manipulated and mislabeled this film shows us how you have to take everything with a grain of salt as footage is faked, video game images are passed off as real and cover stories forget that social media posts tell a different story. In the film we see how the Bellingcat crew broke open the downing of the airliner via social media and Google Earth or that a sharp eyed member realized that Russian evidence of the US working with Isis consisted of video game maps. It will all spin your head.

Forget whether you are Republican or Democrat what this film shows will shock you. It will change how you see the news. It changed how I see the world.

And before you ask why we should take the word of groups like Bellingcat, the answer is simple, and revealed in the film. Where places like the New York Times or Washington Post have the weight of their reputations behind it, the groups like Bellingcat have the weight of evidence. They do not report unless they have the data and facts to back it up. In an age where journalists not being trained and there is less and less investigative work, it is the people like Bellingcat who do what no one else can or will.

This film is a stunner. It is one of the great films of 2019 and a must see for anyone who wants to consider themselves informed about the state of the world.

The film plays June 20th at Human Rights Watch FIlm Festival New York and is a must see. For tickets go here.
Posted by Steve Kopian at June 16, 2019