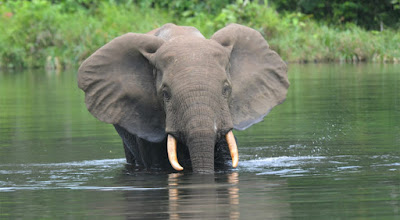 It kills me that Mariah Wilson's SILENT FOREST  maybe destined to get lost in the shuffle. A portrait of the efforts to save the forest elephants in the Congo Basin, it is coming on the heals of at least five or six similar films in the last 18 months or so. I fear audiences and distributors may think they have seen it all, which is a shame because this film covers a great deal of territory that most people will not be aware of even if they see the other films.

Not focusing on one subject,person or topic relating to conservation but several, the film gives us a look at one of Cameroon’s first female eco-guards, a grassroots wildlife law enforcement group, a Congolese biologist studying elephant behavior, a reformed elephant poacher, and a team of anti-poaching sniffer dogs led by a Czech conservationist. Its a lot to chew on and it is the reason that the film runs almost to hours of screen time. While the coverage is not uniformly perfect, there is so much here it all can't be, and while you will no doubt prefer some threads to others, we are still given a great deal to chew on.

While many of the the other films are much flashier in their treatment of the subject, SILENT FOREST is much more low key and to the point, with the result we are filled to the brim with sense of why we need to protect the wildlife in the Basin.   I know the low key  style will make the film suffer in comparison for those people want constant beautiful vistas and cute animals filling there screens, and that is all well and good, but Mariah Wilson understands that this is a human story as much as it is one about the animals and her focus brings us closer to the efforts to save the animals. Because we really get to know the men and women at the center of the story we come to understand why they are doing what they are doing so we too are given a clue as to why we should be joining them in the fight. This is the film that is going to make you get off your ass and actually do something.

I really liked this film a great deal. As someone who has seen most, if not all of recent conservation films I know that this is one of the best of the bunch. Definitely and highly recommended.

For ticket and information go here.
Posted by Steve Kopian at June 04, 2019