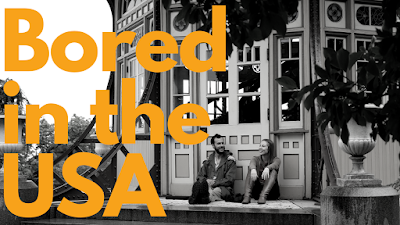 Discovering the recent addition to Amazon Prime of BORED IN THE USA allowed me to come upon one of those great off the beaten trail films Unseen Films was set up to highlight.

The film is the story of what happens when a an from London meets a bored American house wife and they begin to talk. As the pair begins to connect the are forced to reflect on the rest of their dull lives.

Working because actress Kelly Lloyd and Chris Milner sell their roles, BORED IN THE USA is something special. Once the by the numbers set up sequences that open the film are done and the pair meet the film takes off as they talk and joke and come together in ways that are not by the book and are very close to reality. Working with writer director Mike Finazzo the pair are allowed to be human. They are allowed to be silent or awkward. conversations spin out in unexpected ways with the result that we happily follow along because we can't be certain how this will go.

If you are tired of Hollywood blockbusters or even the over abundance of by the numbers inde dramas BORED IN THE USA will delight you. It is a lovely little film that acts as a firm reminder that floating out among all the films we've seen advertised to death are these small gems just waiting to be stumbled upon. More importantly it is in these small charmers that people like director Finazzo are proving that real and creative cinema is still alive and well, it's just living nowhere near Hollywood.

BORED IN THE USA is on Amazon Prime so if you have the service there is no reason not to try it.
Posted by Steve Kopian at June 02, 2019