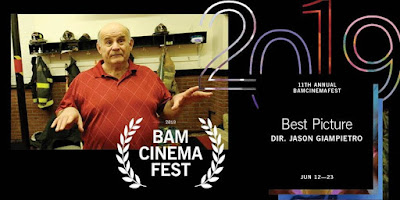 I am not going to review Jay Giampietro‘s short Best Picture and which is World Premiering at BAM Cinemafest. Don’t get me wrong I like the film a great deal, but the problem is the short is essentially a monolog of my friend Sam Juliano on the night of this year’s past Oscar’s and it charts his reaction as the awards don’t go as he expects.

Filmed at Sam’s annual Oscar party the film cuts parts of his conversations together to form a six minute monolog. The result is very amusing, especially if you know someone who likes to talk about the movies endlessly. At the same time, and the reason I won’t do a formal review is that it also gives a slightly skewed portrait of Sam as a non-stop talker. Having spent time with Sam he does come up for air. The clash between the Sam on screen and in real life has mixed my feeling up enough I don’t want to review it.

On the other hand, because on its own terms it is a really good fictional portrait of a crazed cinema buff I do think you should see it when it plays Sunday with THE HOTTEST AUGUST at Cinemafest

For ticket and more information go here.
Posted by Steve Kopian at June 14, 2019