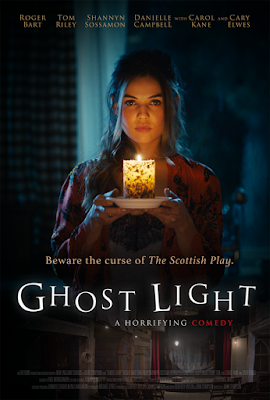 It is very difficult to do a horror comedy or comedy horror film well. The trick in balancing the laugh and scares isn’t one many people know with the result that most films trying to be funny scary tend to be neither. When it works the films are absolute delights, which is what Ghost Light is, an absolute delight.

The film follows a traveling troop of actors who go to an out of the way summer stock theater in Massachusetts. The plan is for them is to reopen the theater with a production of Macbeth. When one of the actors doesn’t take care to follow the rituals concerning the play things go horribly wrong.

Once the film gets past an over explanation of the play’s curse, it just goes, managing to be both very funny and frequently chilly as the film earns its self-imposed description as a dark comedy. (Remember this is a horror comedy so bad things happen).

That the film works as well as it does is due entirely to the top flight cast. Filled with great actors like Cary Elwes, Carol Kane, Roger Bart, Steve Tom, Sheldon Best, Tom Riley and Danielle Campbell who suck us in and drag us along through the spooky proceedings past all the bumps in the plotting. Particularly wondrous is Carol Kane. As someone whose mental picture of her is her wild and crazy comedies, he role here hearkens back to her early dramatic work in films like Hester Street. Yes, she is funny, but she is also so spot on with the drama that I think this maybe my new favorite memory of her.

I love this film. Yea I could probably nitpick bits of the plotting as things we’ve seen before, but since director John Stimpson manages to get the tone and the feel so right I’ll forgive any problems simply because it’s been much too long since any comedy raised goosebumps on my arms from the scares.