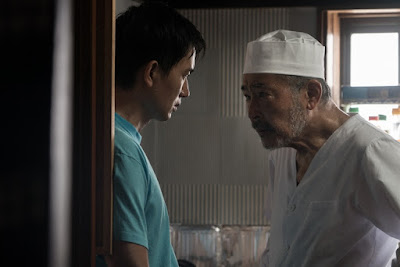 COMPLICITY
Heavy drama revolves around a Chinese national in Japan illegally. Buying a cellphone and identity on the black market he gets a job in a rural village at a soba shop. Falling into the rhythms of the shop and possibly in love, he must navigate a life that isn't fully his own and one where there is danger of deportation.

Well made and well acted film is long but solid drama. While decidedly not my cup of tea, it is much too brooding for my taste, this film will delight those who like art house dramas. 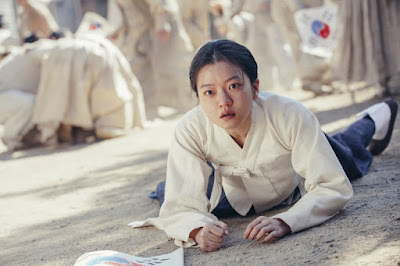 A RESISTANCE
True story of Yu Gwan-sun who was caught illegally protesting the Japanese occupation of Korea in 1919. She is thrown in prison for three years and struggles to survive in a 10 by 10 foot cell with dozens of other women. However she refuses to bend and gives hope to the women around her.

By the numbers historical drama is good telling of what the Japanese were up to when they controlled Korea. While not bad there is a kind of distance, and sense of "we have a point" in the telling that made it impossible for me to fully engage and to feel anything toward the people on screen
Posted by Steve Kopian at June 30, 2019