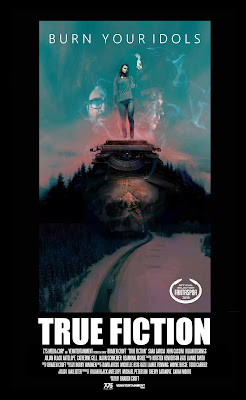 Avery Malone is an aspiring writer who gets a job to work as the assistant of a reclusive best selling author. She will be the subject of a consensual controlled psychological experiment in terror which will form the basis of his next book. Of course things don't go as planned and the lines between reality and fiction blur.

To be honest I find I'm very mixed on the film. While I like the premise of the film, I love films with the potential to play mind games with the audience,  I don't think the film truly manages to pull it off. I never full gave myself over to the film. Watching the film I found myself standing outside it looking at the gears turn and not inside it becoming afraid.

For me a large part of the blame falls on Sarah Garcia who plays Avery. While she is adequate in the role of the tormented assistant, she never really managed to convince me that she was truly tormented. There was a coldness and a distance to her and I never fully believed she was in the moment. In someways I felt like I could see her acting.

To be fair I'm not sure if the problem is her performance or if it is simply that we really don't know enough about her to care. We are given a few token scenes before she is thrown to the wolf, and while that may have worked in other cases the scenes seem almost an after thought, with the majority of the better writing focused on the cat and mouse scenes. And that is another problem, writer director Braden Croft seems to have focused on some of the terror sequences more than the rest of the film with the result that this sometimes feels like fancy banquet where only some of the courses were made by the chef and the rest are take out from Mc Donalds.

While I don't dislike the film, I like it enough to know that in better hands this should have been a film I loved.

Worth a look for those who like mind games films, all others proceed with caution.