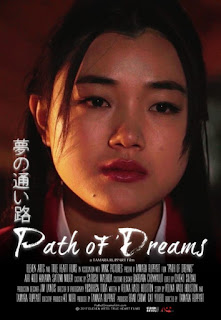 Path of Dreams is a small little gem about two poets locked in an amorous dance. She is Ono no Komachi, one of the most revered poets in Japan. He is an upstart who wants to bed her. She wants no part of it. He still pursues her and she agrees but only if he can woo her with his words over a period of 100 nights.

Based on a legendary incident in the life of Komachi, this is a small gem. Komachi was a real person but other than her poetry all we really have is legends, which the film turns into love and passion and desire of the soul. How much of the story is true, is irrelevant since this is more the story of doomed romance but something more such as the story of words and their power to change our souls and melt our hearts.

Beautifully made and perfectly acted Path of Dreams gets under your skin and carries you along.