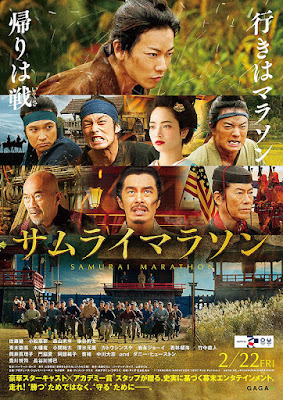 Opening Night film of the 2019 New York Asian Film Festival concerns the changes that resulted with the coming of Commodore Perry's Black Ships to Japan.  One of the samurai, sensing the change in the winds decides to prepare his men for modern life by staging a Marathon. The race is mistaken for revolt and things get dicey, and one man who realizes there is no danger has to stop those looking to end the run for their own political ends.

Okay drama looks great but never quite sings the way it should. Blame it on an unevenness of tone which prevents us from full engaging. While not even remotely historically accurate, and largely being humorous, the film wanders all over the place tonally as some things,such as the Americans are played for big laughs, while other moments are much more serious. I remained outside of everything because I didn't know what I was supposed to feel.

While never bad, it wasn't anything special.

An interesting misfire.
Posted by Steve Kopian at June 29, 2019