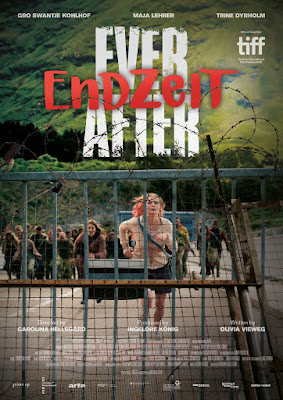 The world has been largely wiped out by a plague that turns the dead into zombies. Only two cities in Germany remain. Wanting to get out of the brutal Weimar, where authorities brutally take no chance on infection, two women hop on the automatic train and head to the supposedly better city of Jena, where they are trying to combat the plague through science. When the train stops midway to Jena the pair are forced to make the trek on foot. But all is not quite right and it becomes clear that nature it trying to reset the table.

Anyone looking for a straight take on the typical zombie film is probably going to be left scratching their heads. This is not a straight on zombies hunting people tale. Think of this as one of the zombie films where filmmakers do more than just pile up bodies, ala any of the George Romero films, or newer films like MAGGIE that use the form to explore social themes. Yes, the zombies are here,but there is a way more going on.

While a great deal of the world of the film isn't explained (I would like to know more) it all works (why I want to know more) and enough going on here that it doesn't matter. EMDZEIT has enough threads and ideas in it that I would love to see what happens in another film set in this world. Where so many other films don't bother creating a world which makes sense, ths leadin got some sort of WTF moments,ENDZEIT doesn't let that happen. We always know enough that we go with anything thrown at us.

That the film works is due to director Carolina Hellsgård and writer Olivia Vieweg (adapting her own comic) who have fashioned a film that grabs our attention by not following the typical tropes and asking a lot of questions that we don't really see in other zombie films such as "why is this happening" and "what does this all mean?" This allows us to think about the themes in the large context of the real world where nature seems to be revolting. Thanks to their refusal to simply give us a film that is just about survival they have added another film to the small but growing zombie subgenre of thoughtful films that belong with Romero's classics.

Destined to become a classic, and a film that zombie fanboys hotly debate, ENDZEIT is a great film that proves that there is a great deal of life in the tired genre if you know where to look.
Posted by Steve Kopian at June 18, 2019