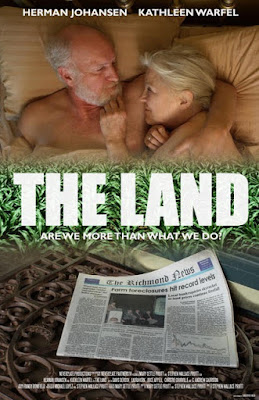 The Land is a good low key look at the problems of being older and being a small farmer. The film concerns a couple who have fallen on hard times but who refuse to give up their land despite there really being no way for them to hold on it nor their desire to stop working.

This is a small inde drama that manages to both entertain us with a good story and performances while informing us about the plight of the small farmer. I am not going to lie or try to puff the film up calling it a must see or what have you. Instead I am simply going to highlight this small solid film as one that deserves a look. Almost certainly this is going to be something that most people are going to (incorrectly) pass over because either they don’t think it’s for them or because it isn’t getting hyped. Hype is all well and good but sometimes you just need a small solid film to pass a couple of hours, and in that case The Land fits the bill. Frankly I would rather see a couple really good films like this than a big bloated Hollywood hype machine.

Recommended for anyone who is tired of big and loud and showy and instead wants something small, warm and human.