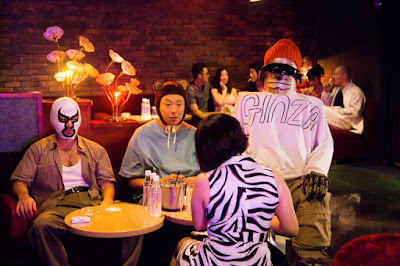 Ukon and Ushiyama are working for ultra nationalists looking to find the Shogun's lost gold so it can be used to bring back the glory of Japan. As the pair tries to get buy and maybe find some female company, they discover a retro style robot that they adopt. With the Help of Ukon's brother they unlock the robot's potential and cause all sorts of trouble for themselves.

Off beat but incredibly low key and dry science fiction comedy is either going to thrill you with it's off kilter and very rambling take on things or it is going to bore you. Consider the fact that Ukon, our hero, barely cracks a smile for most of the film. Worse the film takes its time going anywhere and when it does its not really what you expected. Trust me on this- I got about 20 minutes into the film when I had to stop the film to look to see what film I was watching. It didn't seem to be the film I thought it was. It was, and soon after the 20 minutes it sort of started to come around to the festival synopsis.

To be honest I have no idea  whether to recommend the film or not. This is one of those films that you're either going to love or hate since it's sense of humor is so one of a kind. (Somewhere along the lines of if Steven Wright and Jim Jarmusch had a love child and then did science experiments on it). I'm going to guess that not everyone is going to like this.

Personally I like the idea of the film and I like moments but the rambling low key nature worked against me liking the film as a whole. It was a thing that I saw and I'll leave it there.

For tickets or more information for Saturday's screening go here.

Hard-Core plays in July at Fantasia Fest in Montreal
Posted by Steve Kopian at June 28, 2019