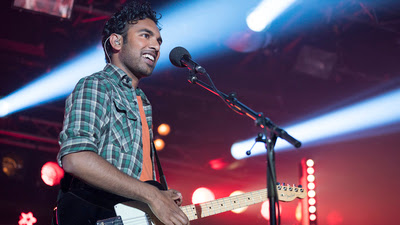 Here is slightly modified version of my review of Yesterday which I posted after the film World Premiered at the Tribeca Film Festival in May. The film opens Friday and is highly recommended

Richard Curtis and Danny Boyle's film YESTERDAY imagines a world where everyone except one man (Himesh Patel) has any idea who the Beatles are. It is as if they never existed. He then reverses his fortunes by claiming their songs as his own. At the same time he tries to not ruin his beautiful friendship and declare his love to his best fiend, number one fan and manager (Lily James).

YESTERDAY is a truly wonderful film.  It was the perfect way to end this year's Tribeca Film Fest (it was the closing film). One part comedy, one part romance and a couple of parts of musical magic the film delights on pretty much every level. The right sort of knowing, the film uses the conceit of the plot to give us wonderful moments of either laughter or tears as either the music or references to the Beatles pop up where ever we turn.

I will not give examples of the wonders in the film simply because the film isn't released until Friday and I don't want to be the one to spoil anything. Besides if I start really talking about it I will end up saying too much. I will say other than outside of one misplaced performance, the film is a damn near perfect romantic comedy that will bring tears to your eyes. (The romance here is killer)

In all honesty the film is a complete an utter joy, which I fully expect to end up in the Oscar mix as an audience favorite. I also expect it to become the most favorite films of many people for decades to come. While I know some people didn't like the film (I could hear a couple of people with dead souls saying bad things about it in the line to get out) I think most people will fall in love with it.

And yes the versions of the Beatles songs we hear are really good, so good I want to buy the album.