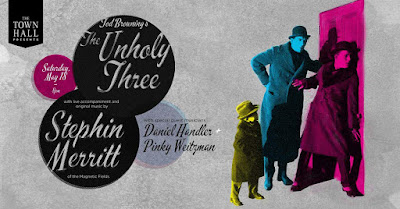 The original silent version of The Unholy Three played a couple of weeks back at New York City’s Town Hall. Normally that wouldn’t have been any big deal but the music was by Stephin Merritt of the Magnetic Fields with assists by Daniel (Lemony Snickett) Handler and Pinkie Weitzman. It was a wonderful score that mixed ukulele, viola, and accordion with synthesizer and plastic pigs.

The night began awkwardly as the fact that Daniel Handler’s monitor went down so that time had to be filled while they got it up and running. Pinkie told some jokes, Daniel kibitzed and Stephin sang an unreleased Magnetic Fields song.

The film began with the audience participation short SISSY-BOY SLAP PARTY by Guy Maddin which requires the audiences to clap whenever anyone is slapped. This resulted in lots of laughs and what sounded like thunderous applause.

The Unholy Three is a trip. I haven’t seen this version in years and it was cool to see it scored live.

The plot has three side show performers Tweedledee a midget (Harry Earles), Hercules a strong man (Victor McLaughlin) and Echo, A Ventriloquist (Lon Chaney) setting up a pet store where they sold parrots to the rich. When the birds failed to speak they would go to the homes and case them for later burglary. Tensions within the group begin to grow as their accomplice Rosie (Mae Busch) falls for their store clerk Hector. When an act of kindness prevents the Echo from going out on a robbery Tweedledee and Hercules go by themselves. A man is killed and little girl hurt. Suspicion falls on the group because they were in the house seeing about a non-talking parrot a day or so before the killing.

A lurid melodrama that is both funny on purpose and because time has marched on since it was made, The Unholy Three is wild ride. I mean there is a killer ape in the film just because Tod Browning wanted to have a killer ape in it. There is a real sense of sleaze to some of what happens…but more importantly there is a real sense of emotion to what happens. You genuinely feel for the characters on screen. Sure Hector is nebbish, but you understand that he genuinely loves Rosie. We also bleed for Echo and his unrequited love for her as well. We know he will do anything to make sure she gets her heart’s desire, which is the love of the guy who loves the goodness he sees in her. I may have been chuckling at some of what goes on but when Echo release her from her promise at the end I got misty because Chaney was such a good actor that you could see all of the pain underneath the brave face.

It is interesting to note that McLaughlin said that he truly learned how to act from talking to and working with Chaney because he was simply that good.

The Unholy Three is a great deal of fun, more so when seen on the big screen with a killer score….
Posted by Steve Kopian at June 05, 2019