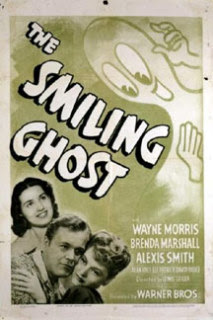 What ever you're getting paid for this job it's too little
Elinor Bentley a cursed woman, after kissing the man hired to be her fiance.

One of the Warner Archive releases in the Horror/Mystery Double feature set is a grand little film that breezes along and makes you lose track of time.

The plot has "Lucky" Downing being hired by a wealthy woman to become engaged to her granddaughter for a month. What she doesn't tell Lucky is that all of her granddaughter's suitors have died or been maimed, allegedly by the ghost of here first fiance who drown. As complications and bodies arise Lucky discovers whats going on, thanks in part to the lovely Lil, a hard nosed reporter.

A grandly entertaining film this is a real treat. Why I hadn't run across it before is a mystery to me since I've been tracking down mysteries like this for the last few years and thought I had run across most of them, I guess not.

Filled with great characters (I love the crazy rich family which includes one member who specializes in shrinking head) and a genuine sense of humor. This is a film that is funny at the right time. It also is rather tense, even if you can pretty much guess right off the bat who the killer really is.

This one is a keeper and it alone makes the set comes in worth getting on its own.
Posted by Steve Kopian at July 03, 2012