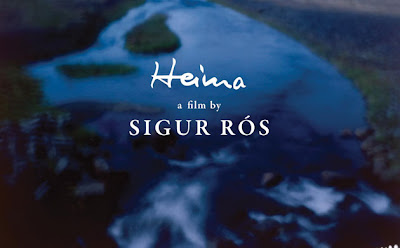 Next week Sigur Ros is playing the Bandshell in Prospect Park Brooklyn. The concert sold out before I could get tickets, however since its an out door concert and since sound carries I’ll be attending anyway if only to listen.

In order to get in the mood I’m going to talk about Heima, the first concert film by the band.

As many of you know fell in love with Sigur Ros after seeing their second concert film Inni. This is a moody black and white film that records a series of concerts in England.

Heima is the story of what happened when Sigur Ros returned to Iceland after their 2006 world tour. Deciding to give back to the people they decided to tour the country in a series of free concerts in a variety of locations. Intercutting interviews with performances the film follows the group as they go from tiny coffee houses to huge out door concerts, to places in the middle of nowhere, to banquet halls to where ever. The purpose of the film seems to have been to act as the excuse to play in as many different sonically different places while at the same time playing for whom ever shows up.

Blurring the line between straight record and staged performance piece, we get lots of moments that are pure cinema. A marching band wanders through a town then trudges on stage during a song, as the group begins to play their first song nature runs backward as if the band is recharging themselves and the country, a piece near the end starts as a slowly building song with old holiday footage, merging to the group meeting friends before their final performances and the becoming a dance of a growing number of red kites in the sky. By its end your heart and soul will be flying as well.

I love this film. I’ve taken to just putting it on and using it as a prescription for just chilling since there is something about the music and the Icelandic countryside that is nicely calming.

Actually pick up the DVD and watch not only the film but also the marvelous second disc which is over two and a half hours of additional music, interviews and events that occurred on the tour. It’s a marvelous film in its own right. (Okay it’s not a film but a collection of clips that are a great deal of fun)