I have had a very long hot day. This was the wrong day to go traveling around Manhattan but I did it anyway.

The day started with DONNIE YEN.

Yes, I got to be part of a panel interview with Donnie Yen this morning. What an amazing man. He is a raconteur of the highest order spinning out stories in such away that not only time flew but also you want to ask more questions to pick up the threads. He is impossible to to do a panel interview with simply because you can't ask just one question.

He was amazing..and as nice as he was after Lost Bladesman he is even more so in the one on one situation (or one on seven)

I will report more as soon as I get the time to transcribe the interview. My sole question for Donnie was actually a follow up to his talking about how he has now done a couple of non-action comedies and a romance. I wanted to know if he ever foresaw a period where he stopped with the action and did dramas owing to how good he is dramatically. He said it's unlikely unless someone came to him and paid him to do it. He did say that the non-action roles were nice since he didn't have to sweat.

The other tidbit which you've probably heard was IP Man 3D is a possibility.

After that I was walking on air (I'm a fan boy I'm not proud). I went off and did some errands.

I made it to the Walter Reade in time to hunker down and get a good spot for the days movies.

First up was Zeroman Vs The Half Virgin. This strange exercises in WTF filmmaking is about a man who suddenly can see the number of times you have had sex each time he masturbates. It then gets weirder and weirder before pulling the rug out from under us before getting weirder and very uncomfortable.

I didn't like it all that much. About a half dozen people didn't like it enough to walk out. My problem with the film is that it's essentially a shaggy dog story with a sting in the tail...Yea I know its not suppose to make sense, but even it's internal logic falls down. Mostly I could never buy our hero playing pocket pool ALL THE TIME. It's not even that it's that no one says anything even in passing.

While I didn't care for it many people were laughing, in particular the woman four seats down from me who was near tears laughing through most of it.

I was joined by Mondocurry and Mr C for King of Pigs.

I will not go into detail since Mondocurry interviewed the director and is going to really write up the film, but this animated look at bullying is a little slice of hell. I wanted to kill myself by the end. How Mondocurry has sat through the film 3 times is beyond me. It's not bleak, bleak is too happy, this is something else.

For the record its the story of two old friends who get together to talk about the hell of their school days. Auschwitz I think had a friendlier atmosphere.

As a film film, its a low budget animated film with a kick ass script. 98% of the film is as good a film as I've seen but something happened toward the very end which lessened it for me-though I still felt like I had been worked over by a gang wielding tire irons.

It's playing Sunday night again if you want to abuse yourself, which I highly recommend if you think you can stand it.

Kenji Fujishima (who writes for a variety of publications and has the blog My Life at 24 Frames per Second) confused the hell out of me by sneaking out at the start of the Q&A so he could get on the standby line for Donnie Yen's Lost Bladesman, only to return what seemed seconds later with a ticket in hand. He had lucked out on getting a ticket and appeared at the box office just as one had been returned.

I'll let Mondocurry go into the Q&A since he is better suited to discuss it. 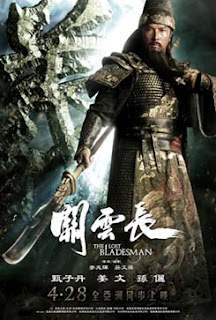 The final film for me was The Lost Bladesman.

Before the film we were told that Donnie had brought along gifts for everyone, folders with Donnie on both sides. It was a real treat (and one that will be repeated at every screening of one of Yen's films)

Donnie introduced the film. and then came out for a Q&A which ran long and resulted in everyone getting thrown out...and I believe Donnie setting up shop in the theater gallery to sign autographs. (It's too late to really go into the Q&A, besides much of what he said related to what he said in the interview so I'm going to try and tie it all together.

The film itself is a melodramatic(but in a good way) story of Guan Yu, a general at the time of the Three Kingdoms, who plays a cat and mouse game with Cao Cao an adviser to the emperor who is holding him captive. Yu gets his freedom but is pursued by assassins. There is way more to the story, but all you need know is that it stars Dinnie Yen and has some of his most amazing action sequences.

The film's flaw is that the story is genuinely complicated (actually there is a ton of back story and the tale goes on for 20 years past these events) so unless you know the whole story you may feel overwhelmed. Even so this is a visual delight and quite frankly of all of the Donnie Yen films screening as part of the NYAFF, this was the one that had to be seen on the big screen from start to finish.

After the Q&A, I headed home.

It was a really long day that started early and went late...and I had a blast.

Coming tomorrow a short day with just two films so check back tomorrow for a report on that insanity.

(Apologizes and a belated HELLO to the young lady who was at the interview with me this morning and who passed me by as I was fumbling with my cellphone. I know you were rushing to Guns and Roses, and I was arguing with ATT.)
Posted by Steve Kopian at July 08, 2012