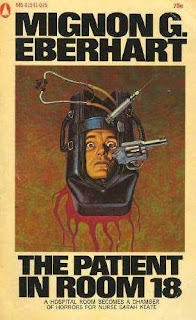 One of the final screen pairings of Lance O'Leary and his girlfriend nurse Sara Keate. This time out O'Leary is played by Patrick Knowles and Keate is still Ann Sheridan.

The film has O'Leary in the throws oa nervous breakdown when he fails to solve a case. Ordered to rest he is taken to the hospital where his girlfriend Sara Keate is head nurse. While O'Leary is recouping a rich man is brought in and in order to cure a nasty skin condition one hunred thousand dollars (in 1938 dollars) is strapped to his chest. In short order the oldman is murdered and the radium goes missing.

If you love these old school mysteries, you owe it to yourself to see this film. Its a blast.
Posted by Steve Kopian at July 04, 2012