Short day at the NYAFF and this will hopefully be a short post. I'm so tired of writing up stuff that today I just went to the festival with the intention of chucking my responsibility to Unseen and just watching the movies. In the words of John Astin on Night Court "I'm feeling much better now"

After shifting train schedules and breakfast on the (kind of) fly with Stan I headed up to the Walter Reade Theater for a a couple of movies. There Stan and I met Mondocurry (doing a triple feature), Mr C (doing a quadruple feature) and Luigi (doing at least two, maybe more) 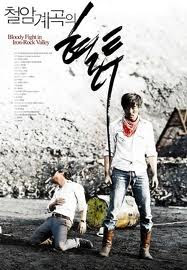 First up was the small scale Bloody Fight in Iron-Rock Valley. A modern day remake of Sergio Leone's Once Upon a Time in the West (with steals from other classic westerns). The film tells the story of a man with no name who gets out of prison and aims to get revenge on the men who raped his sister and were responsible for sending him to prison.

Riding on a motorcycle to a town in the mountains our (anti)hero uses the cover of looking for work in order to run down the bad guys. They now work for a powerful developer who wants the land under a temple.

What happens is a nasty series of twists and turns that leave pretty much everyone, if not wounded or dead, at least covered in blood. This is not over the top John Woo violence but small scale realistic violence that is way more jarring because it could happen.

It's a film that is very much a western in design. Honestly it wasn't until I was sitting on the train on the way home that I realized that it really is a remake of Once upon a Time... with its land grab, hooker making good, relative seeking revenge and money man in a wheelchair.

It's a film that I really like a great deal. Actually in a festival that has been consistently good but not full of peaks, this is one of the better films I've seen. Very much recommended. 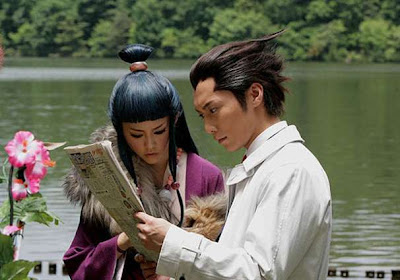 Both screenings at the NYAFF sold out. Almost all of the tickets today seemed to be the in the hands of young women who are fans of the video game. Yea, there were numerous guy fans there as well, but based on the orgasmic yelps behind me it was mostly young ladies.

As someone who has never played the game I was amused. How could you not be? Its an over the top comedy with character design and plot points lifted from the game. One person talking to Mr C was going on about how perfectly the film captures the video game.

This is a court room dramedy about Phoenix Wright, a defense attorney who ends up defending a childhood friend and courtroom enemy for murder. I'm not going into the plot since it feels like its being made up as it goes along, much like a video game. (And like many video games the film it goes on way too long)

I laughed and I was amused, but at the same time I kept figuring that this would be better if I had played the game. The audience around me had and they gushed at many moments that had Mondocurry,C and myself looking at each other uncomprehendingly.

Its a good film, but if you're not a Phoenix Wright Ace Attorney player your mileage will vary. If you're a fan of the director's Takashi Miike, you'll enjoy (some of) it since it has some wonderful moments that only Miike could pull off.

Recommended for fans of the director or the game. All others you're on your own.

(and remember the free movie Tuesday at the Tribeca cinemas.
Posted by Steve Kopian at July 08, 2012