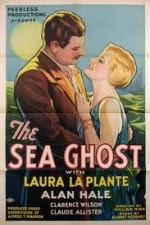 Alan Hale (Father of the Skipper on Gilligan Island) stars as a Captain of a ship during WW1. When a sub sinks a passenger liner he pauses in his pursuit of the sub to check for survivors. A Naval board of inquiry finds he disobeyed orders and removes him from service. Years later as Captain of his own ship he is hired to recover a safe from the hold of the ship that was sunk and to allow the captain of the sub to be the man who dives. From there we have other complications involving a will, weaselly lawyers, fist fights and other nonsense. A very good very early sound film that makes one wonder why Hale never got more leading roles. A breezy and fast paced 62 minutes this movie is the sort of thing that Hollywood rarely made, especially after the production code was enforced (bare shoulders on a women, hints of lesbianism were among the no no's). I really liked this movie a great deal. Let me be honest its a not a great film, but it was perfect for a very cloudy Sunday afternoon when I was feeling under the weather. It was the perfect distraction from the world and my woes.

River of Evil(1963)
A woman hires a boat captain to take her into the Amazon where her father has gone missing. Along the way the villains end up kidnapping her and its up to the Captain to to rescue her. Very good adventure yarn with some great action, some clever turns and one of the nastiest piranha attacks ever caught on film. I don't care if its just an animal that gets eaten it will make your skin crawl as it goes on and on and on. This is a near perfect rainy day sort of movie. If there is any real flaw its that the print I saw seems to have been trimmed down, probably to fit into slot on TV with commercials. I'm guessing this because the print has a couple of jumps in story that are too egregious to be anything other than intentionally caused. (The film also has the ear marks of being a black and white version of a color movie, which again would lead me to believe that this was once part of some TV package of Euro-films that were sold to local stations) Cut or not this is a film thats worth abag of popcorn and a soda on a rainy afternoon.
Posted by Steve Kopian at July 22, 2012