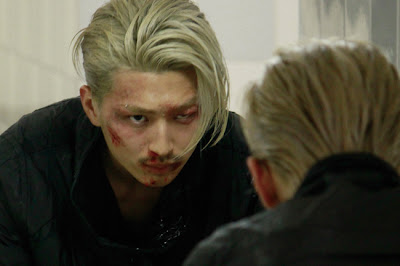 Su-yeon Gu's semi-autobiographical story of a Japanese born Korean named Gu who lives in a port city in Japan. Gu works a variety of jobs and has ties to the underworld. As he ends up on everyone's shit list, thanks to his attempts at helping the oppressed, Gu has to find away out of the dead end life he's in.

A little slice of hell with nasty violence, often of a misogynistic variety, this film is a poke in the eye. Yes, the film has some humor, often of the catch in your throat variety. The unpleasantness is funny in a "we shouldn't be laughing at this" sort of a way thanks to clever use of music and a dead panness that keeps things from becoming unbearable.

The real question is outside of the violence and the unpleasantness is the film any good? I don't know. More directly does it have a point or reason to exist? Again I don't know.

My problem with the film is that not long into the film I suddenly realized that the film, like it's main character, is going nowhere. Sure plot lines come and go, characters appear and are beaten to pulp, but does it add up to anything?

On some level the film is good because it provokes a reaction...but at the same time it also doesn't seem to go anywhere so even though you feel unnerved and unpleasant you still want to know why you were subjected to it. Ultimately it makes you ask "And you're telling me this because...?" unfortunately the film has no answer.