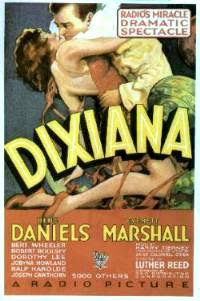 Wheeler and Woolsey musical comedy set in the pre-Civil War South is a mixed bag. The comedy duo are not the "stars" of the picture, rather that is Bebe Daniels. Wheeler and Woolsey are instead the comic relief and they do a good job of creating laughs. The plot concerns the pair attempting to make sure that the wedding of their sister goes off without a hitch. Its a big scale musical of the kind they don't make any more.

The film is based on a Broadway show and while it is suitably spectacular at times it suffers from the problem many films of the time suffered from and that is an uncertainty of camera usage. Because of the sound equipment was noisy and large, directors and studios were still struggling with how to shoot scenes or move a camera, here the camera is either moving nicely or painfully nailed down. Its a tough slog. Then again the film's operetta style music is really not my cup of tea.

If you like musicals its worth a try, especially if you're interested in the history of movie musicals.

(I do have to say that rarely have I ever felt a movie recreated a bygone era as well as this film does. Hollywood flourishes aside this film really does feel as if you're watching something from long ago in the deep south)