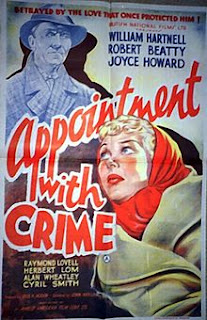 Okay British crime drama with William Hartnell as a crook who gets caught in a smash and grab when a gate falls on his wrists. When he gets out of prison he tells his boss he wants money for not saying anything- the boss says no, so Hartnell plots revenge.

This is the first lead role I've seen with Hartnell outside of Doctor Who and it's clear why he was always a character. He's incredibly stiff, which made him perfect for the soldiers and policemen he often played in other films, but not really leading man material.

While the film is good, it kind of just missed for me, the result of the shooting style being more stlized than anythng-tilted cameras people standing in tableaus. There is something there that makes it better than just a typical crime film, but at the same time there is a formality that under cuts it.

Reservations aside, the film is worth at least trying, especially if you only know Hartnell as The Doctor.
Posted by Steve Kopian at July 31, 2012