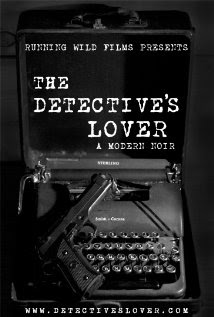 This is the sort of film that Unseen was started to highlight. This is a small film, that odds are you've never heard of and without Unseen you never would have heard of. Its a small scale treat and a nice throw back to the glory days of film noir.

The plot of the film has to do with Scott,a bored reporter in Arizona (played by writer director Travis Mills) who hasn't turned in a story in ages. Tired of covering onion festivals and local interest stories he wants to do more investigative stories, like the one he did that shook up the local sheriff's department. His boss isn't too happy with that idea because of the trouble it caused the last time. Teetering on getting fired our hero is spending his time and money running down private detectives so he can write up their stories. Set on the trail of a detective named John D, the journalist is soon going down the rabbit hole involving the title character.

I really liked this film. Though not perfect it's a small little gem of a film.

I watch a large number of small independent films and I am frequently seeing films that, more times than not, are gallant tries but which just never quite pull it together. This is especially true of many stabs at film noir. For some reason the people who try to do noir more often than not botch it. The Detective's Lover manages to stay out of all of the pitfalls. This isn't to say that the film isn't without flaws, there are a few, but they don't ruin a good little thriller.

Since I brought it up, let me start with the flaws. While the film is shot in a moody black and white the use of the camera isn't particularly imaginative. At times the sequences seem little more than point and shoot affairs. I suspect that part of the problem is that the film was shot quickly and on the cheap in real locations so they were limited in how they could move or set up the the camera. It's not damaging, but for a film with such great dialog and characters I wish the camera work was better.

The film stumbles in regard to bits of the plot. A couple of times things happen that don't quite make sense, for example it appears that our hero hasn't written anything in weeks (months?), and yet he still has a job. There are one or two points in the story where characters appear more to drive things rather than appearing organically. Its minor niggling annoyances rather than our right flaws.

The film's biggest flaw is that main character Scott is bland. He's a mopey guy who doesn't seem particularly bright, certainly not bright enough to write about the sheriff's department in anyway that would cause problems. Give writer/director star points for the script and direction, just take a few away for a dull performance.

Okay enough of the bad on with the good.

First off everyone in the cast is wonderful. These are the broken down people on the fringes of society that you would imagine a modern noir. Look at the line up of detectives that Scott encounters (several of which are well known writers like Lawrence Block and James Sallis) all of which leave an impression that stays with you. Peripheral characters like John D's wife make it clear that we aren't in Kansas any more. Everyone is spot on to the point that we never flounder around wondering who anyone is. They are also the sort of people that you'd want to follow to see which sewer they are going to dive down.

The other treat here is the script. It crackles and pops with fantastic hard boiled exchanges and monologue. I dare you not to replay John D's monologue to Scott about what being a detective is really like. Its a world weary explanation about how being a private dick is deadly dull to the point that anyone who does it lies about their success (see the opening quote). Even if everything else didn't work, the script and it's endlessly quotable lines would pull you through. Sue me,it's so nice to hear some really good noir dialog. So many writers today can't do it,but writer Travis Mills pulls it off.

Seriously. This is a small gem.

Currently playing in film festivals across the US, the film hits on demand services at the end of July. If you like noir this is a film that's very much worth giving a shot to.

(A thank you to Peter Gutierrez for sending the film my way)
Posted by Steve Kopian at July 06, 2012