Hara-Kiri:Death of a Samurai and No Man's Zone (Japan Cuts 2012) 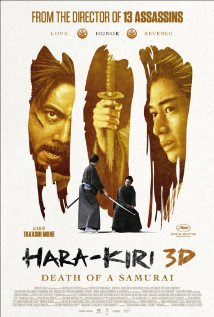 Since the first of the Japan Cuts films was at 315, I realized that if there was an early enough screening I could see Takashi Miike's 3D Hara Kiri. there was an 1105 so I went down to the IFC center and bought myself a ticket.

The story is based on a novel by Yasuhiko Takiguchi which is also the basis for a classic film from 1962. Things begin when a poor samurai arrives at the home of the local lord asking to be allowed to kill himself in his court yard. Fearing a bluff for money the lord takes the samurai in and tells him the story of another samurai who had come earlier, just such a bluff that went "wrong". The poor samurai persists and then tells his story, which is linked to the first man.

I paid $17.50 to see this at the IFC Center. I say this because that's way too much for a movie under the best of circumstances but for as bad a projection of a film as this it's inexcusable. Early technical glitches aside the screening was so dark that any 3D was all but lost. Yes it worked in a few sequences, and really popped in three sequences with bright flowers and the snowy finale, but the light was so terrible that everything dissolved into the films largely grey palate. It was so bad I watched a chunk of the film with out the glasses on.

How was the film itself?

Yes I know that the film is pretty much a soap opera, but it takes forever to get where it's going. I was yawning.

And it's not the story, which is quite good, I think the script is badly put together. What do I mean? There is a cruel turn by one of the Samurai at the Lord's house that seems to imply something deeper than just not liking the suicide bluff. The tale of the long flashback that forms the tale that lead up to the first suicide is truly soap opera, which is fine, but outside of three characters and their pain we don't know anything about their world. Certainly we don't know enough or see enough for the larger issues raised in the final confrontation to resonate as fully as they should.

That said the film has some amazing set pieces, the first act of suicide is quite honestly one of the most horrifying things ever put on screen. People in front of me were curling up in their seat. Also the finale is an amazing piece of samurai action.

At this point I have to state that as good as the end is, it reminded me of Sword of Desperation, a film that played last year at Japan Cuts. That film also dealt with questions of honor, loyalty and revenge, not to mention the larger questions of the samurai system.

It's not a terrible film, but one that didn't seem to benefit from 3D or paying almost 20 bucks to see it.

After the movie I headed out to get lunch and drain my meager savings via the 50% off Criterion sale at Barnes and Noble.

I then headed up to the Japan Society for No Man's Zone.

This is where a problem occurred. Whomever did the scheduling for Japan Cuts for today didn't take into account that you really can't schedule a two hour movie in a two hour slot and then clear and refill the theater in enough time to stay on track. Add intros to the movies plus director appearances and you can see that things went sideways from the start.

The movie was supposed to start at 315, I don't think we were let in until after that and I don't think the movie started after the directors intro until about 345. It was a cock up that lead me to bail on Is Anyone Alive because by my guess-timate it wasn't going to start until after 8 which would mean a midnight arrival at home.

Director Toshi Fujiwara began his pre-film statement by saying he didn't want to say anything about the film. We were to take it as a film on it's own terms without any preconceived notions from him. He said that while filming began some 40 days after the earthquake (he didn't want to get into the rescuers way) the film should not be taken as to how things are right now. He said a year as passed since filming and things have changed. 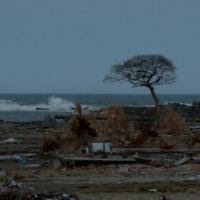 No Man's Zone is a film record of Fujiwara's trip int to the 20 kilometer no man's zone around the damaged Fukushima power plant. At first it's a travelogue of the devastation left by the earthquake and the tsunami. The film then shifts gears to how people are coping. How are the people displaced or who have suffered losses from the disaster coping. There is a philosophical voice over which mixes with the words of various people who have been affected. We get several extended interviews with people in the zone.

Ultimately it's part of a record of an event that no one ever foresaw happening.

A documentary crossed with meditation or essay, this is a hypnotic and unique film. There is no real finger pointing (though there is a discussion of government mishandling of things-which is partly explained by understanding this is beyond comprehension), there is only the damaged landscape and damaged people. Fujiwara shows them to us and lets us make up our own minds.

I'm still trying to come to terms with what I've seen and what I heard since the commentary is full of food for thought about how we process disasters.

Is it a great film?

I don't think so, I think it's a little too heady to truly touch the heart. However as an exploration of an event it's dynamite.

After the film the director answered a few questions as the audience for the next film was seated.

He said that he is aware that in some form he is exploiting the tragedy. I don't think it sits well with him but at the same time he feels that there has to be a record.

He said that the most asked question about the film was why make it? He replied that the real question should be why not make it.

Samuel from the Japan Society asked him about the use of silences and sound. He said that the silences are there because there are silences where he filmed. No one is around so there is no sound, only the sound of nature which is why it fades into the soundtrack like it does when you're there.

There was also some fleeting words on disaster tourism, which seems to be a growing things not only in Japan but elsewhere in the world.

There was a few more bits but out of context, like much of the narration, they will mean nothing to you. He did say that he is working a follow up which he is financing until he can find backing.

When the movie was done I ran into Hubert from Flixist. We both headed out despite having tickets for a later movie. Both of us were/are exhausted and we both didn't think we could handle a later night than planned.

We then headed home, walking back to Grand Central and subways toward home.

The long run of film festivals is almost over. I have two more Japan Cuts screenings this week and Unseen will be reviewing several other films in the line up as well, so keep reading.
Posted by Steve Kopian at July 23, 2012