An unintentionally weird double feature resulted the other night as I was pulling DVDs out from deep in the pile of unwatched stuff. 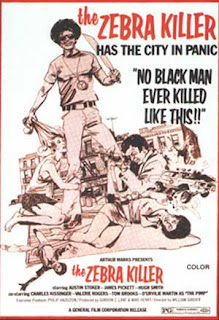 First up was The Zebra Killer, which had a variety of other names you might have seen it under. This is a strange little film from the very good B film director William Girdler. The plot of the film has a psychopath going around killing people in ways related to their professions. He runs up against a cop who takes offense that he’s kidnapped his girlfriend. It’s a typical psycho on the loose tale with one weird twist- the killer is a white guy in blackface and afro wig. Bad taste? Not really, more a clever disguise, but I’m sure that the whole blackface angle has kept it off the radar of most people. (I know I read some people have taken offence that the lead character, a black cop, eats fried chicken but I don’t know why since it’s clearly matter of fact dinner than slur)

To be honest, weird killer aside this is just an okay little film. The problem is that outside of a really crazy killer this is a too talky crime story with nothing to set it apart from any other one. Its not bad, but it’s the whole blackface angle that makes it stand out.

I liked it, I didn’t love it. Its worth seeing as part of a double or triple feature but nothing I’d watch on its own. 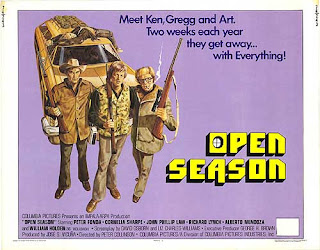 Yea I know you say these sort of films are a dime a dozen these days, but this was made in 1974 and it stars Richard Lynch, John Phillip Law, Peter Fonda and William Holden.

The film is oddly civilized and yet rather sleazy, the bad guys are really normal looking even if they are psychopathic. If you want to see a perfect example on film why so many crazy people can hide from view see this film. Their seeming normal exterior couple with the darkness of their acts is what gives this film it strength.

I’m not sure what I think of the film. It hits lots of the right notes, many that no other film has managed to hit, the urbanity of the bad guys for example, but at the same time the film is a bit too Hollywood, its too civilized and bloodless in some of the violence. Don’t get me wrong, its not bad, I wouldn’t have mentioned it if it was, rather it just misses being great which it feels like it should be.