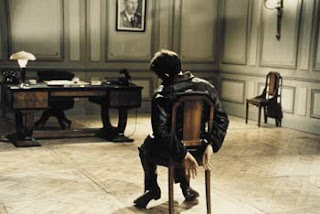 A while back Roger Ebert put this on his great movie list.

At the time of the article a restored version of the film was making it's visit to theaters around the country. Instead of going I checked for a DVD release. I picked up a region 2 disc for less than it would cost for me to go into the city to see it. I couldn't wait for the DVD since most reviews were about equal to Ebert's take. I opted for DVD since the city screenings were inconvenient- owing in part to a two and a half hour running time.

This is a lost "classic" from Jean-Pierre Melville a film maker of great regard. An iconoclast who made movies his way (and with his own money) and who died before he could be recognized so his films fell out of favor. His films are legends in the film community however until Army of Shadows I'd only seen the Red Circle, which has a first hour I adore and a last 80 minutes I'm disappointed in.

Army of Shadows tells the story of several members of the French Resistance during the Second World War. Its a movie about people and not about battles. This is war on the small scale as people just try to help fight the enemy and stay alive-even though they know that their days are numbered.

Brilliantly made this is a movie of people. Its all the actors, who say more in a glance than most other movies say in hours of dialog. Its a movie that begins heading in one direction and then goes in another. It defies expectations as it takes you from one moment in time and brings you to another. Its a slice of life during wartime.

I'm not sure what I think of the film. Is it a great movie? I don't know but it haunts me- years after I first saw it I still can't not think about it at least once or twice a week
Certainly it is a dense movie. A great deal happens. I was twenty minutes in and realized that I still had two hours left to go. How can it be that they've covered enough material for three movies in so short a time?

Its a long slow movie. Its almost two and a half hours long and at times I felt it. Part of this is due to the long quiet stretches that are like real life if the characters existed. This is a movie about hiding in the dark and in the silence. Of trying not to be over heard so there are silent passages. Its at times unfocused, but then so is life.

Its clearly cinematic. The opening rain storm is clearly make believe, a plane is a model. There is rear screen projection and an odd occasional cinematic touch that signals that this is make believe and yet the world is a real place. We feel the terror and the emotion.

And as I said there is the amazing acting, which is across the board touching and as real as it gets. Only perhaps Simone Signore as Mathilde seems out of place, but then again maybe no...we feel her strength, her pain and her mother's love.

It's a well researched film based on a novel by a member of the resistance. I heard an interview with the cinematographer who said that surviving resistance members helped to shape scenes and to explain how things really would have gone. Knowing that helps some of the odder bits go down (since they seem so odd - the firing range bit- that you can't be sure it could have happened.)

I really like this movie but I'm not sure if its just a very good one or a great one. My quandary is the result of final bit of text at the end of the movie. Its one of those things that changes whats gone before. Its not that its anything thats out of place, its just that I'm not sure we need it- then again its one of those things that while it moved me, I'm not sure if its a cheat of sorts. What it is is one of those what happened next sort of things. For me it colors whats gone before, its one of the times where I'm left wondering if we should see the events or if we know about them at all.(It actually has me pondering the use of such techniques in all movies)

That said its a movie to search out, On dvd if not in theaters.(Criterion has since put out an edition with extras that I repurchased) I won't say absolutely its a great film, but I will concede that it could be since the film has been kicking around in my head since I saw it the first time.

I also want to warn those who need action every minute that this is not a movie for you. Stuff happens but as I said its more often quiet tension rather than overt action. If you can't sit still and let it play out stay away.
Posted by Steve Kopian at July 16, 2012