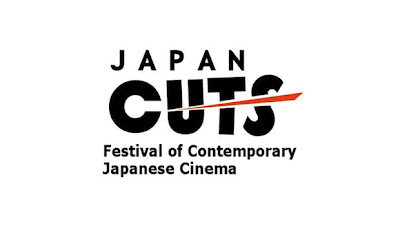 I have to apologize to Japan Cuts. It starts Thursday when it counter programs to the NYAFF’s schedule at the Walter Reade. It then takes over from Walter Reade with three days of NYAFF programing at the Japan Society. Because it’s starting up in the middle of the NYAFF I haven’t given it a fair shake, then again most of Japan Cuts runs for two weeks after the co-presentations so there’s time. Actually I’ll be running reviews over the next two weeks and talking more about it along the way.

The truth be told Japan Cuts actually is running some of the best film at the NYAFF. WHile I have been enjoying my time around the Walter Reade, what they are showing at the Japan Society is even better.

As it stands now we should be clocking in with reviews of 24 or 25 of the films at Japan Cuts. It's purely a scheduling problem with almost all of the films running only once, and some of the ones we really want to see running late enough that the train ride back home would be in the wee hours of the next day.

Here's a break down on our projected coverage


We’ve already reviewed the following films, many of which are co-presented with NYAFF)

Mondocurry has seen Rebirth, and if I can get him to say a few words on it I’ll post it. We talked about the film, which he saw several weeks before it was announced for Japan Cuts but he wasn’t sure he wanted to write on it.

I may get to reviewing:
Someday
9 Souls
Cure
Shall We Dance

These are running as part of some retrospectives which I'll talk more about closer to time.

That’s a lot of films so keep coming back or bookmark the Japan Cuts 2012 tag so you can jump to our coverage. For information on all Japan Cuts films go to their page here
Posted by Steve Kopian at July 09, 2012