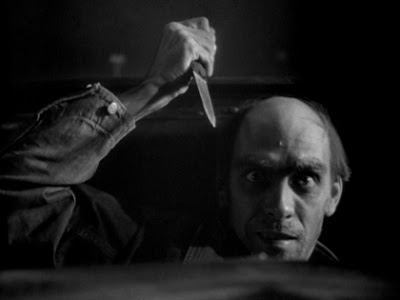 I loved this movie.

Part of the Warner Archive Mystery/Horror Double feature set, this is a film I know will get lots of viewing, more so since it's on the disc with the good on its own terms Sh! The Octopus. This is another one of the films in the 3DVD set that makes it worth buying on it's own terms.

Things begin with the escape of John Channing from a mental asylum. As the local police show up to investigate, Channing slips into the rumble seat of their car. Channing is a mad killer and will pretty much kill anyone at the drop of a hat. The cops figuring Channing might break for home, head to the home of his sister. Channing slips out of the car and makes his way inside. It transpires that Ms Channing has helped her brother escape from the asylum with intention of him helping her kill off the rest of the family she calls vultures. She wants to weed out the bad ones with any good ones, if there are any good ones, getting her money. What follows is a series of murders and misdirection as people are drugged, killed and bodies are moved about.

This is a super little film.

In its way it’s a weird melding of film noir with the old dark house genres. The setting is old dark house while the actions of the various characters often behave with a cynicalness that you only find in noir. There is also an implication of unwed pregnancy and some of the more mature subjects the code wouldn’t allow you to deal with. There is also a nice sprinkling of humor as Willie Best as the house boy deals with the shadowy figures he happens to see moving around. Most films of this sort would end up botching the tonal shifts but here it’s nailed perfectly so that you get perfectly placed jokes and gasps.

The film works thanks in large part to the cast, and in particular MiltonParsons as the escaped nut, John Channing. Parsons is ghoulishly wonderful as a guy who clearly wants to kill everyone, but who some how manages to restrain himself while acting as his sister’s butler. Why people haven’t been talking about his performance is beyond me. It’s a blast. The only reason I can think of is that the Hidden Hand’s short running time prevented it from getting any play on TV, while it’s B nature kept it from being rereleased.

God bless the Warner Archive for finding and returning this lost gem to us.