Down to the final two days at the New York Asian Film Festival, which means I'm at the start of my time at Japan Cuts.

...which is a state that many of the rest of you going to the festival in as well (I'm not getting into the people running the festival since they clearly need to be put away for a long rest). I spoke to a bunch of people covering the fest and just going and everyone is worn out. 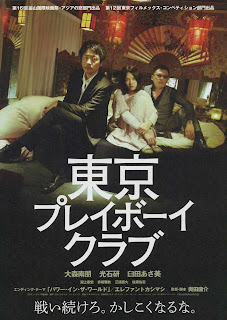 Sitting waiting for Tokyo Playboy Club to start a tall blond gentleman came striding down the aisle and asked if I was DB? Yes I said. And Alec from Flixist introduced myself. We then sat talking until the film started. He is a great guy and I completely understand why Hubert hangs with him.

(For those wondering how he could know who I am if we had never met, if you've ever seen the bald big guy that I am you won't forget me, no matter how hard you try. I'm easy to spot once I'm described)

As Rufus took the stage to introduce the movie I got a slap on the back as Mr C slid into the seat in front of me.

Rufus said that Tokyo Playboy Club was a film he wanted to screen. He said it was one of the more alive films in the festival and one of his favorites. He said that some people compared to Tarantino and Miike, but he didn't think that was appropriate. It's not nor is it fair.

Playboy Club is a multi-character story centered at the run down hostess club of the title. Things are set in motion when an ex-gangster (kind of) trying to go straight needs a place to hide so he goes to an old friend, the owner of the club for a place to hide out. We also get to meet one of the employees of the club, his girlfriend and his paramour...and then there are the three gangster brothers...

There is no way to explain this film with out telling you everything so I won't. It's a really good film that is completely unlike what ever it is you maybe expecting. As Mr C said "I read on the film but it wasn't what I was expecting". No it's not. It's like Tarantino (say Pulp Fiction) and yet completely different. Its a film you stay with to the very end because you have no idea where this is going to go. I mean a whole bunch of us sat there waiting through the end credits because there could be something at the end (there wasn't)

Speaking of the end credits, when they started to roll there was an audible groan from a portion of the audience. Not to give anything away, but they, like me couldn't believe that they were leaving it there...yes they were. While it's in keeping with the anything can happen nature, I wish I knew what happened next...

As Rufus said it starts slow but once it gets going it is gangbusters. One of the better films at the NYAFF/Japan Cuts.

Between screenings Mr C left. He was heading up town for an outdoor screening on playground basketball. Based on what he said, it sounds great and I hope he reports in.

I also got a chance to talk fleetingly to Kenji from My Life at 24fps and assorted other places. He is a really good guy who seems to be in constant motion. 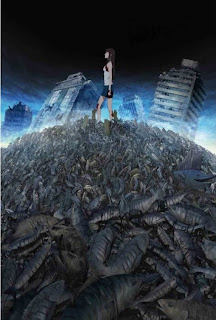 Inside the screening Alec and myself were joined by Hubert and (don't kill me if I get this wrong) Mike from Fangoria. I say this because anyone who was there there, and who made it to sunlight deserve a badge of honor...not because the film was bad but because while it's one of the best films at the NYAFF/ Japan Cuts, it's also the very definition of WRONG. It's a movie that will mess you up.

There is no way in hell that I can describe this film to you and have you understand , I mean REALLY UNDERSTAND what it's like seeing this film in a darkened theater. Think being trapped in someone Else's nightmare where your rules and logic don't work.

It's funny, I mean the initial premise that has flatulent fish on spider like legs coming out of the ocean is funny, but it just goes so horribly terribly monstrously wrong.

People in the audience were moaning and talking out loud between the nervous laughter. It's a film that crawls inside you and makes you uncomfortable even as you're laughing at it.

Walking down 47th street with Alec and Hubert there was a point during the heated discussion about Gyo (some of the most passionate I've had about any film at the festival should add) that Alec turned to Hubert and myself and said "we saw something else today, what was it?" It took a minute before we realized it was Tokyo Playboy Club.

Gyo is a kind of mind wipe.

Gyo is a movie that clears the mind of anything else you experienced before it.

Heading home I stopped into Midtown Comics to try and get the comic book by Junji Ito. They didn't have it. I then called Randi to ask her to email to find the comic on line. She could tell I was mentally bent.

Gyo is one of those films.

Applause to the NYAFF/Japan Cuts crew for getting it. But GOD DAMN IT ONLY ONE SHOW? ONE? Had you ran this baby twice you would have had to beat people away once the word of mouth started.

When you can, see Gyo, just do so early in the day, you don't want to be dreaming about what's in this film.

(And a shout out to the lovely Lee who I was waiting on line for Love Strikes! and to whom I didn't get a chance to say hi to)
Posted by Steve Kopian at July 14, 2012