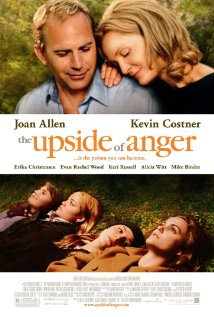 Many recent family dramas bother me. They never seem real, they seem more contrived than the natural flow of events in the lives of characters. To me many are let’s make something dramatic so people will watch instead of telling a believable story. This dislike of the dramas is one of the reason that the Upside of Anger surprised me, some how it got around my defenses.

The film begins with Joan Allen’s husband disappearing. No one knows where he went or why but everyone suspects that he’s had an affair and run off with his paramour. The family is shattered, but they begin to rebuild. As mom tries to get on with her life, helped in part by the interest in neighbor Kevin Costner, her daughters must deal with complications in their own lives.

I won’t say more about the plot since the joy of the film is simply watching how the characters crash into each other.

Actually the joy of the film is watching a group of characters who seem real. These are people you might know. What happens to them are things that we might encounter in our lives. I really appreciate that as the film unfolds nothing in the film feels forced or made to happen to keep the plot going or for an effect.

The cast is great as well with Allen and Costner giving nicely lived in performances.

I really like this film a great deal. It’s a film that I find I keep recommending to people who want a good drama. Its weird since I haven’t seen the film in a while, and yet its one of those films that I seem to keep close to me heart and at the top of the recommended list.

If you’ve never seen it, give it a try. Its one of those small gem films that some how always managed to get lost behind the bigger and flashier productions.

If you have seen it see it again, I’m going to , since its time to revisit an old friend.
Posted by Steve Kopian at July 19, 2012