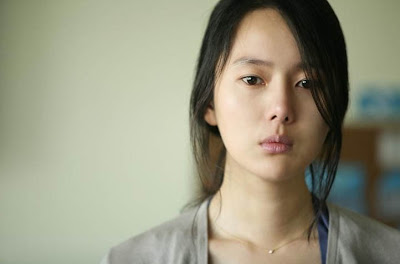 The next series of films at the Korean Cultural service FREE screenings is Tuesday. It the first of a two film retrospective of the work of Yoon Jin-Seo who was in Old Boy with Choi Min-sik.

Tuesday’s film is Secret Love. It’s being presented as part of the NYAFF and as an added bonus Yoon Jin-seo will be at the screening.

A chance to see her for free? You have to go. I mean think about all the people who are paying to see her at the Lincoln Center and here she’ll be in the house for free….and in a house one quarter the size of the Walter Reade.

Here’s what the Korean Cultural Service has to say about the film and the series:


YOON JIN-SEO - An Actress on the Edge: FROM OLDBOY TO BEASTIE BOYS

Nearly a decade ago, Yoon Jin-Seo exploded onto the world of cinema with her star-making role in Park Chan-wook’s blockbuster OLDBOY. The stunning 29-year-old young actress has been a staple of the Korean film industry ever since and from the supernatural horrors of Ki-hwan Oh’s Voices to the laugh-packed Good Day for an Affair, this petite powerhouse has the world’s attention and shows no signs of slowing down. After ten short years, her résumé now tallies more than a dozen of Korea’s biggest features, so it’s no surprise that the Korean Cultural Service – in association with The New York Asian Film Festival – is immensely proud to present two of this talented, boundary-pushing young actress’ most powerful new films… with Ms. Jin-Seo herself in attendance!

JULY 10 – SECRET LOVE (2009)
International Premiere
Only two months after their storybook marriage, beautiful young Yeon-Yi (Yoon Jin-Seo) is suffering through the repercussions of a tragic car accident that’s placed her handsome new husband Jin-woo (Oldboy’s Yoo Ji-Tae) into a deep coma. Utterly destroyed, she finds herself waiting at the airport for her husband’s brother Jin-Ho, but, never having previously met, Yeon-Yi shocked to discover that he and Jin-woo are identical twins. Initially cold toward each other, the two soon fall head-over-heels in forbidden love… and things become even more problematic when Jin-woo suddenly awakens from his coma.


Actress Yoon Jin-Seo will introduce the film, and will participate in a Q&A session following the feature!

The once-affluent Seung-Woo (pop superstar Yoon Kye-Sang) is now relegated to serving female customers at a host bar - a late-night job that dangerously flirts with male prostitution. When his encounters with the lovely Ji-Won (Yoon Jin-Seo) turn into more than just a customer-host relationship, the realities of his job quickly rear their ugly head. Meanwhile, his drunk, gambling-obsessed boss Jae-Hyeon (The Chaser’s Ha Jung-Woo) is causing his own complications and, when every problem suddenly collides – Seung-Woo discovers it’s going to take more than just street smarts for him to come out this job unscathed.
Posted by Steve Kopian at July 05, 2012