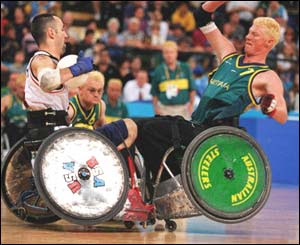 This is the story of a bunch of guys who play wheelchair rugby, aka murderball. This is a game where guys in wheelchairs crash into each other while trying to carry the ball across the goal line. They don't wear pads or helmets, they just go for it. Considering that most of the players have some form a spinal cord injury that limits their mobility, it can be a bit frightening...until you meet the players and then you realize its perfectly normal behavior of guys being guys.

This was one of the best films of 2005. Less about the game then about the people who play it, this is a movie about continuing to compete even after the world has told you no. As these guys and gals show very clearly the limits are only those that we put upon ourselves. This is a movie to make you feel good and hopeful about life and the supposed limits we place on ourselves or have placed upon us by life. This is a movie that should be required viewing for anyone who has suffered any sort of injury since seeing these guys push on you quickly realize that there really are no limits, all one need do is look to see if there are other ways around the onstacle- and there usually is.

A fantastic film. The only problem with it is that its saddled with a misleading title thats sure to keep some away because they don't understand what its really about. See this movie and share it with everyone you know.
Posted by Steve Kopian at July 07, 2012